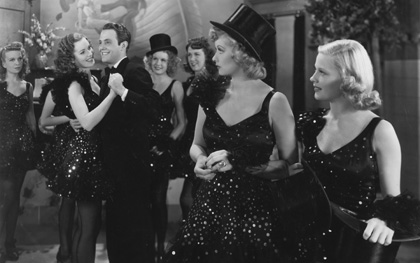 What a warm, satisfying movie this is. As must happen in post-Code Hollywood, a young woman pays a price, both for her naïveté as well as her ability to pack a good wallop, but becomes a better woman for it, having come to terms with her own nature and realizing her dreams in the process. 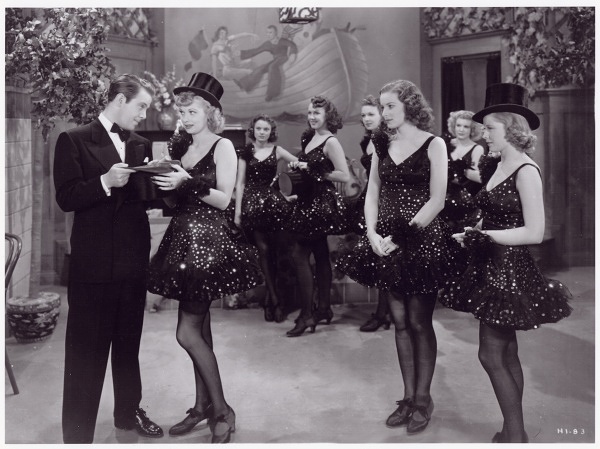 There is so much in Dance, Girl, Dance that it’s hard to know where to begin. What’s most interesting is that Dorothy Arzner has been able to present characters that make many mistakes and yet remain sympathetic. She has an unerring sense of humanity towards these people, hiding their foibles in plain sight by rendering them as charming as they are flawed and struggling.

Their struggles involve primarily finding out who they are but also in finding who they love and it is only in resolving the first that they are able to discover the second. The resolved romances at films end work nicely to underscore this sense that these people have finally come home, only to find themselves opening the door. The film works as a romantic comedy but definitely has serious pre-feminist undertones.

Our heroine,  Judy O’Brian, played by a luminous and young Maureen O’Hara, admits her Irish feistiness but acknowledges she “keeps it to a low simmer”. Her best friend, also a bit of an antagonist, is portrayed by a gorgeous and scene-stealing Lucille Ball. She plays Bubbles, a gold-digger disguised as a dancer but not necessarily one with a heart of gold. Her comedic gifts are certainly on display but here there’s a toughness and an edge rarely seen. Bubbles’ primary aim is to find that gold and keep it for herself; survival is the name of the game. While she’s capable of being a friend she’s not necessarily capable of being a good one. 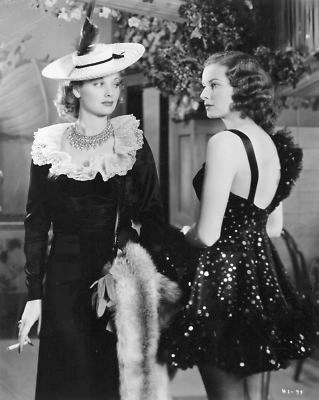 Bubbles offers Judy a chance to finally make a living dancing but it’s a humiliating one where she is actually called a Stooge. Sent on stage to be mocked and laughed at, she’s there to stoke the crowd for the more seductively naughty Bubbles, now facetiously dubbed Tiger Lily White, in a burlesque show.

Judy longs for the kind of break that would allow her to truly pursue her heart and become a serious dancer, but her lack of confidence gets in the way and prevents her from sensing opportunity when it literally smiles her way. As the one doing the smiling, Ralph Bellamy adds a warm presence and a handy shoulder.

Judy’s nightly onstage humiliation moves her anger from what was a simmer to a slow burn and ultimately a full-blown knockdown drag-out with Bubbles. Ostensibly about a man who takes turns toying with each of them, a smarmy Louis Hayward, the confrontation is more about the women’s relationship and who they are to one another. Bubbles maintains this friendship not just because Judy has been useful to her but because she brings a warmth and depth to her life that would not be there without her companionship. Similarly, Judy admires Bubbles ability to unabashedly pursue her selfish interests and thereby make her way in the world, a man’s world, despite compromises. These are two tough women and they admire each other. But the dichotomy they represent is also why they come to blows.

This film opens with a simple dance sequence, marked by dazzling costumes, that immediately establishes character.  This small troupe is overseen by a wise Maria Oupenskaya, portraying Madame Lydia Basilova, who makes a short but lovely appearance as the original source of strength for these women.  Madame, a former ballerina and  head of her own dance troupe is a role model for Judy and Bubbles in an industry compromised by catering to men’s ogles and desires. Madame is tragically killed when Judy goes to what should’ve been her big break but which instead becomes only a revelatory moment; Judy is too frightened to fully pursue her dreams.  It is only when she finally grabs hold of her own anger that she is able to understand she is entitled to her own happiness.

Much of the story revolves around men who are used as plot devices; this is a woman’s story. In one literally show stopping moment O’Hara delivers a scathing speech to her predominately male audience, best seen rather than described. It’s far ahead of its time. 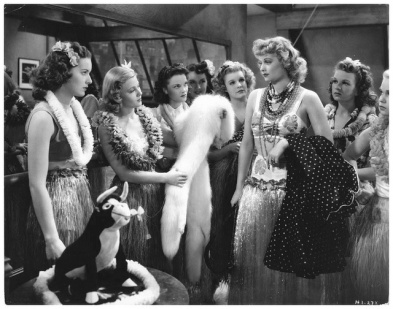 Despite being a film about dance the costuming works in homage to the characters and their development. The film opens with the small troupe dancing in unison in glittering black. However, as the women’s paths diverge, they are never again seen in identical costumes. Bubbles rise up the ladder of success involves not just a name change but the donning of gorgeous coats with luscious fur collars. She is expensively accessorized. Similarly, Judy is seen in simple designs, even wearing a Peter Pan collar to a nightclub, until the very end when she finally comes into her own. The costumes in this picture were designed by Edward Stevenson,  known for his ability to enhance story without drawing attention to his own designs. He later became the favorite designer for Lucille Ball who appreciated his eye for character-driven costumes that never overpowered her considerable personality except when needed for comedic effect.

Maureen O’Hara positively glows with her youthfulness and beauty in this early role. A mere twenty years old at the time, she had already succeeded in starring roles in two motion pictures, this being her fifth film.

For Lucille Ball, the road to fame was a much longer, arduous process. Almost unbelievably this was Ms. Ball’s 60th film, with many more to come before she finally achieved stardom as Mrs. Ricky Ricardo in the famed I Love Lucy television series. The series was a love child for Lucille Ball and her husband Desi Arnaz.

Based on a story by Vicky Baum and a script by the frequent screenwriting partnership of Tess Slesinger and Frank Davis (A Tree Grows in Brooklyn) Dance, Girl, Dance definitely showcases the perspective of the women who created it and the men who supported their vision.

Recommended, for knowledge of woman in film, lovers of Maureen O’Hara and Lucille Ball and sheer entertainment. 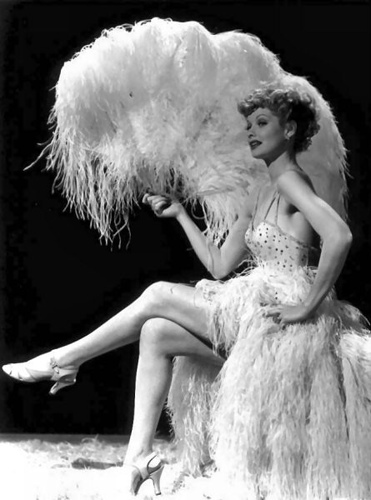 "A man is not old until regrets take the place of dreams" ~ John Barrymore
"You learn concentration, you learn detachment and you learn story telling. And all these things are very important to a film actor who's really a storyteller. We are salesman of the story" – Gregory Peck

Proud contributor to The Pre-Code Companion! Enjoy the writing and reflections of your favorite bloggers as they share the joys of pre-Code film!! Available now from Amazon for Kindle or Kindle app. All praoceeds support the ASPCA!! How can you go wrong!! 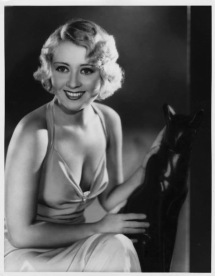 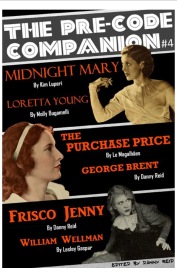 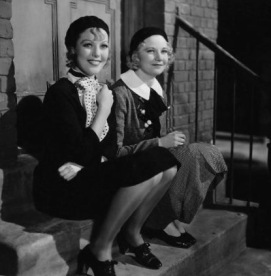 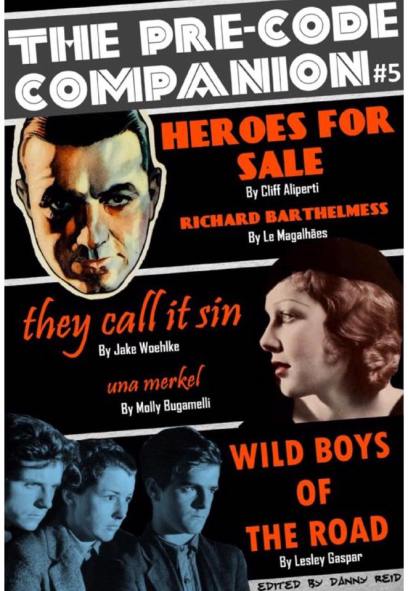 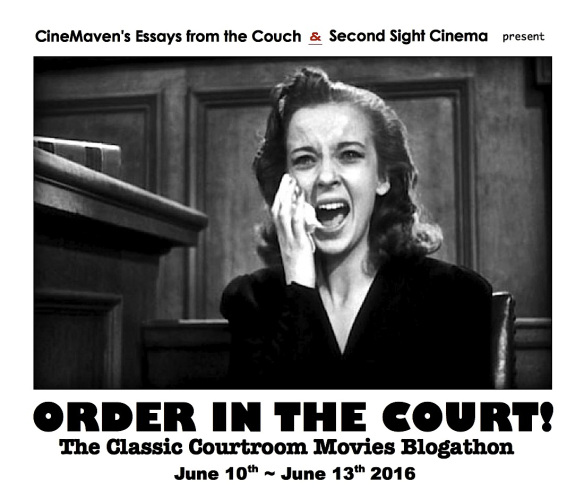 Movies for your Care Home or middle-aged living room. Because by old we mean 85 and by middle-aged we mean 55. Sigh.

A Blog Dedicated to Douglas Fairbanks, Jr. and his Contemporaries

Come take a walk with me in Old Hollywood. There's so much to talk about!

Where old movies go to live

In The Good Old Days Of Classic Hollywood.

Celebrating the golden age of Hollywood

Once upon a screen...

...a classic film and TV blog

CineMaven's ESSAYS from the COUCH

A cinematic prescription for the Classic Filmaholic